Will the future of retail be without physical outlets?

I remember having a very interesting discussion with a new client a couple of years ago on exactly this topic. Like many CPG companies at the time, they were considering online retailing. They were already selling a little online but hadn’t seriously considered it until then.

However, with the move of most major supermarket chains to offer online stores too, plus a few successful online-only stores, such as Amazon in the US and Ocado in the U.K. they were reconsidering just how big they could or should grow their online business.

This discussion happened just a few years back in 2017. Today the question is no longer asked. The pandemic has forced most customers to buy online, at least during the various lockdowns. And many have found the experience both enjoyable and useful.

A recent article on CNBC showed that many major chains in the USA had recorded triple-digit growth in online sales in the first half of this year. But they rightly questioned whether the trend would continue into next year.

They concluded by saying that those retailers who had already invested in online sales would fare better than those forced into it by the pandemic. I agree, as the change in customer behaviour was so fast that it was difficult for those retailers who were not prepared, to catch up and move their sales effectively online. 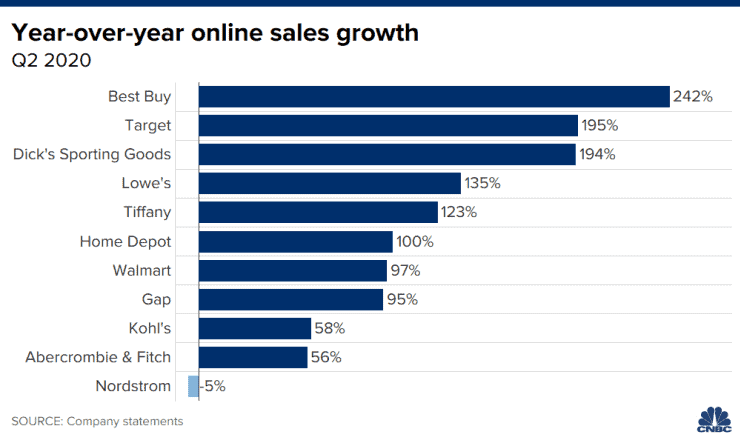 However, they argued that people would return to bricks and mortar stores once the lockdown eases and Adobe has found some data that may just confirm this. E-commerce growth appears to be slowing, as the below graph shows.

I remember participating in heated arguments in the past, between sales teams and retailers, about online stores. Retailers thought that it was unfair competition and threatened to delist a manufacturer’s products if they sold direct. No wonder my client at the time had been scared to develop this area, as in fact were most other CPG companies.

Just a few years ago, Amazon was said to be muddying the waters by testing their new Fresh delivery and Go bricks and mortar outlets. Walmart retaliated with a competitive online offer of fast service and free delivery. The battle had begun and today we see nothing more than an acceleration of the trend that started almost a decade ago. At least that’s my opinion; what do you think?

The case for bricks & mortar stores

An excellent article published mid-2017 in Forbes andentitled “Five Signs That Stores (Not E-Commerce) Are The Future Of Retail” concluded that physical stores are more valuable. Of course, that was three years ago, an eternity especially post-covid! However, it does highlight the importance of scenario planning for preparing an organisation for future opportunities and threats. For me, planning for the future is as simple as taking the consumers’ perspective and understanding what they (will) want.

For example, I’m happy to order my usual brands online and have them delivered, especially when they’re cumbersome, like pet food, drinks, tinned and paper products. Continue Reading